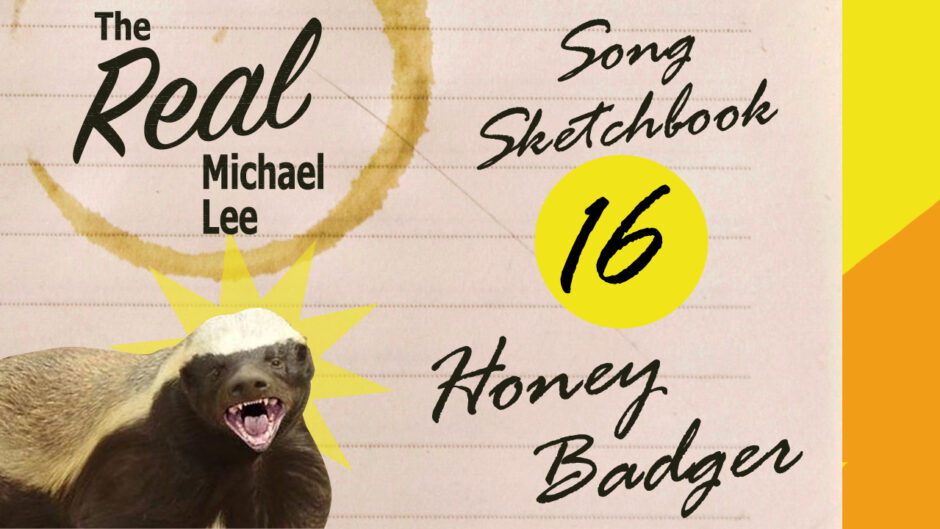 Be assertive! Be confident! Be yourself! Just don’t be a dick like the honey badger. Those things are not like the English badgers and are instead very MEAN and WILL chase you if you look at them sideways.

This week has been crazy, so this song sketch is a bit more rough around the edges compared to last week’s. It still very listenable, but it’s definitely “sketchy.” HOWEVER, it has… BANJO! Yes, I was finally able to get a decent deal on a good banjo. So of course it’s going in the song. Who cares if I’m learning the chords WHILE RECORDING.

Admittedly I had to mix the banjo down to hide all the mistakes, but it’s amazing just how much character it adds to the song even when “hidden.” I look forward to using it on some other songs once I’ve got the hang of it.

Other than fixing the banjo after I, you know, actually practice on it, if Honey Badger makes the cut for the album, I’ll definitely work on the vocals. They’re not quite there and I know I can do better (also doesn’t help I was singing through allergies, but I don’t want to make excuses). I also might tweak some of the chords, specifically in the bridge.

Besides that I do like it lyrically. And yes, I know full well the saying isn’t “honey badger don’t care one bit,” but I wanted to keep it PG. While writing Honey Badger, I actually wrote it in a jumbled order with each verse having four whole extra lines to them each. However that just wasn’t working, so I rearranged it and trimmed it down. Originally there was more explanation as to WHY the main character wants to be more assertive, but I realized I was trying to explain something in four lines that could easily be said in two.