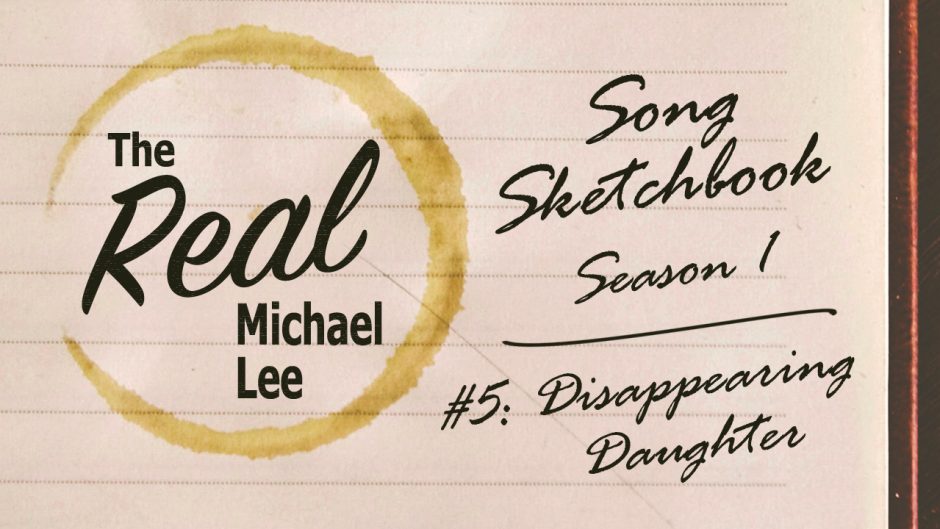 I want to start this post by saying I have NOT, I repeat NOT lost my daughter at any given time. These are characters loosely based on real people, so don’t go calling DCFS because of this song! I take that as assumed, but you never know.

What I have done here is reached out of my comfort zone and tried out the finger picking I’ve been practicing. It’s not perfect, but then again this experiment isn’t about perfection, it’s about GROWTH! Trying new things, pushing my creativity/abilities and really working to lay the groundwork for (what I hope) will be a solid first full-length album. All the while bringing you along for the ride with the hope that it will inspire others the way I’ve been inspired by those who have done something similar.

If Disappearing Daughter makes the cut for the album, I’ll definitely go and tweak the lyrics and the cadence in which they’re sung. One of the things with doing a weekly song is that you really don’t have the time to let the song grow, so often times the lyrics end up a bit loose. Don’t get me wrong, I don’t totally dislike them. I just know they might need some tightening up.

I’ve heard it said, and I firmly believe, that great songs are not written in one go. They live and evolve over time to become great. Imposing a seven-day time limit to create a song doesn’t really allow a song to grow. BUT, what it does do is plant the seed for great music.

For me (and I know others) the hardest part about writing is showing up for it. There are so many distractions available these days that if I didn’t impose a time limit on my work, I’d never tend to my musical “garden” and sit down to write. But gardens don’t grow overnight, so while the songs might not be quite there yet (hence calling them “sketches”), I’m at least planting the seed for something potentially great.

So enjoy this little sprout of a song and I’ll see you next week.