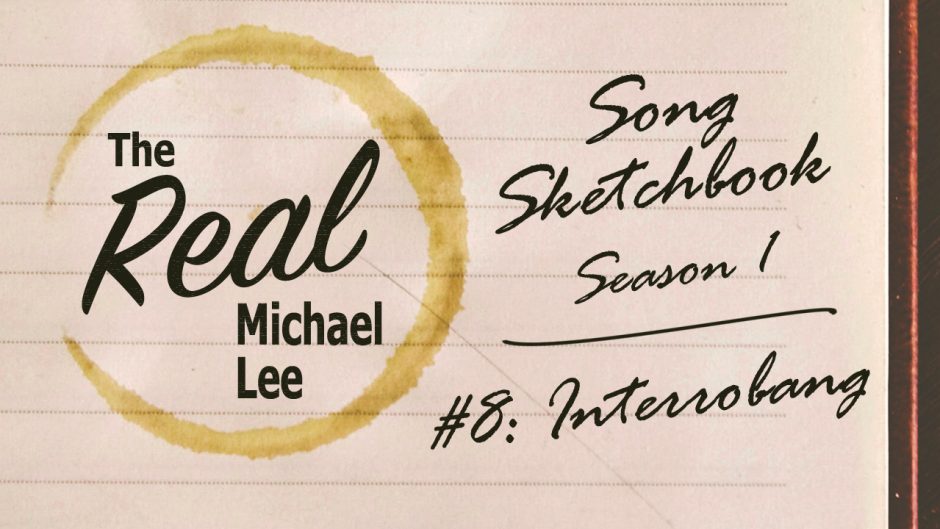 The idea behind this punchy little number came about when I discovered what would become my absolute favorite punctuation mark. A combination of a question mark and an exclamation point, the interrobang is an efficient and fun way to denote an excited question in type. Problem is, it’s rarely used, because despite it’s cult following, most computer programs and operating systems require you to jump through hoops just to type it (Chrome even has whole add-ons just to use it). WordPress does’t even include it in their native symbols selection. (But I CAN insert little playing cards. 🂱 ) So since I can’t type it (even if I did it may or may not even show up on your screen), here’s a big ol’ picture of one, care of Wikipedia:

See? Isn’t that just FUN!? (<– An interrobang should have gone there.)

Regarding the song itself, it is indeed a punchy little number as mentioned above. It clocks in at just over two minutes and doesn’t waste a second. However, I feel it’s another song that really encapsulates the whole “sketch” idea. I feel it still needs some work and could definitely be punchier in places. If it makes the cut for the album, I’ll definitely punch up the vocals. Besides tweaking some cadence here and there, I feel they are missing a bit of je ne sais quoi… Just a bit of something to give them an edge and really drive home the feel I’m going for in the song.

That’s one of the downsides to what I’m doing. While I personally feel there are more upsides, working in a vacuum with a (self-imposed) time limit doesn’t really allow for an atmosphere to figure things out like the vocal quandary. If I revisit this song, I’m banking on time and a fresh perspective to allow for a solution.

Instrumentation-wise, this song is interesting because it changed quite a bit from its original draft. I had originally wrote it with one chord structure, then at some point early on I changed that structure. Because of this I had to re-write the electric guitar parts as they were being recorded. The bass was safe because I usually write that on-the-fly anyway. (Admittedly I quite enjoy the bass riffs in this song.) I also kept adding little bits here and there to pepper more personality to the song. I definitely dig the song more now than I did earlier this week. But, unlike the vacuum/time issue, that is something I really enjoy about this project. When writing under strict conditions, the Muse strikes suddenly and some interesting things tend to happen.

Now I present to you an interesting thing: Interrobang.