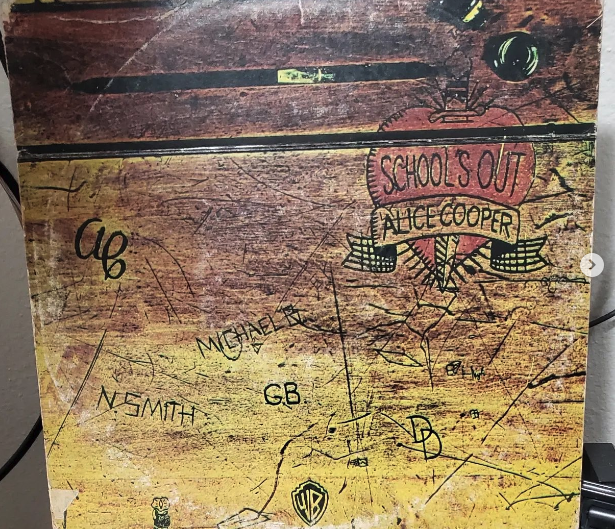 School’s Out is an album that not only perfectly capture’s Alice Cooper’s dark theatricality, it also has some of the best packaging design I’ve seen for an album. (The sleeve has fold-out legs and opens like a desk to reveal the album. Unfortunately my copy does not include the dangerously flammable panty disc sleeve.) Besides the hit single that catapulted Alice into such stardom as to be noticed and featured by the Muppets (Ok, not true, but he DID perform the song on The Muppet Show in a performance that unfortunately has not aged well considering the U.S.’s problem with school violence.), School’s Out showcases a dark glam rock sound mixed with broadway theatricality. West Side Story is even referenced at one point (in the aptly named Gutter Cat vs. The Jets). This might sound like an odd thing to include on a rock album, but it works surprisingly well due to Alice’s dark charm. It also works with the overall narrative of someone leaving high school and figuring out “what now?”, which is something we’ve all felt.

When I first heard the album School’s Out, I was surprised it only had the one “hit” single on it. It might be due to just how legendary that song is, but I would seem the radio didn’t latch on to anything else from the record. On one hand I can see why, as the rest of the album largely works as a whole to further the overall narrative. But on the other hand I think it’s a shame that more people might not have heard Public Animal #9 or Blue Turk because they only ever listened to the greatest hits. School’s Out lays out a relatable narrative set to a dark and seedy glam rock soundtrack. It’s one of many classic Alice Cooper albums and well worth a listen from start to finish.