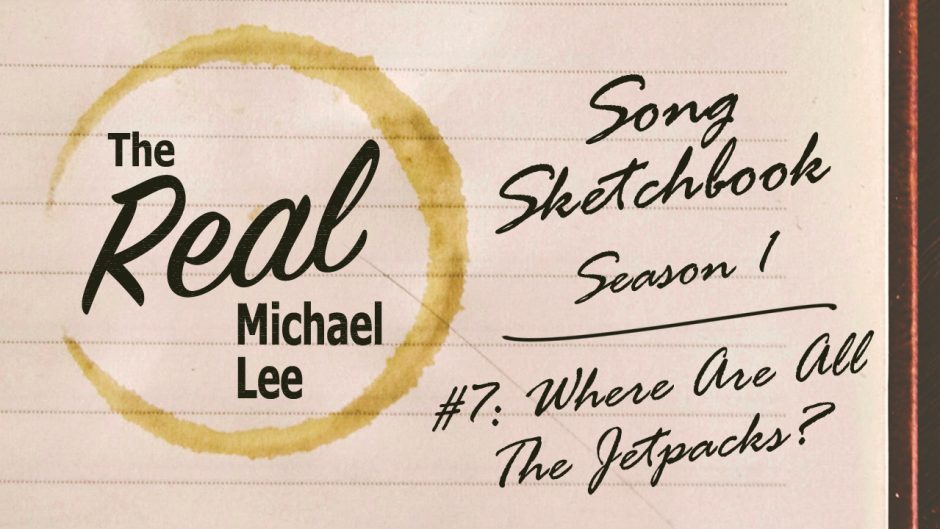 This song… It’s way out there and different than anything I’ve done previously.

Jetpacks started as an excuse to use a new pedal I got (the WMD Geiger Counter). I figured out the hook and nothing else to start, thinking I’d figure it out. Sure enough I did, but not in the way I expected! On Saturday a few of the lines from the chorus quite randomly popped in my head. Then Sunday afternoon I actually wrote out all the lyrics in about 15 minutes with only a very rudimentary idea of the melody. I then created the drums and built the rest up from there. It was definitely a new experience. I believe my working in that odd manner allowed me to break free from the structure I tend to rely upon (i.e. writing on acoustic and building from there) to create something wholly new for myself.

By not following my standard writing structure, I ended up “tinkering” on this song more than the others in the Sketchbook. I just found myself going back and adding a bit here and there. (There’d be more bits if I knew how to play piano!) It got to the point where I had to stop and be happy with it where it is. That’s not to say I DISLIKE it, far from it, but rather I keep coming up with ideas for the song. If it makes the cut for the album, I legitimately don’t know what specifically I’d add, because there’s so much I feel I could do to it.

Another point I’d like to make on Jetpacks is it’s the longest song sketch to date, clocking in at over four minutes. This wasn’t intentional, as I had created a longer second “heavy” part with a plan to slowly fade out the ending. But I ended up liking the very end so much I kept the whole thing!