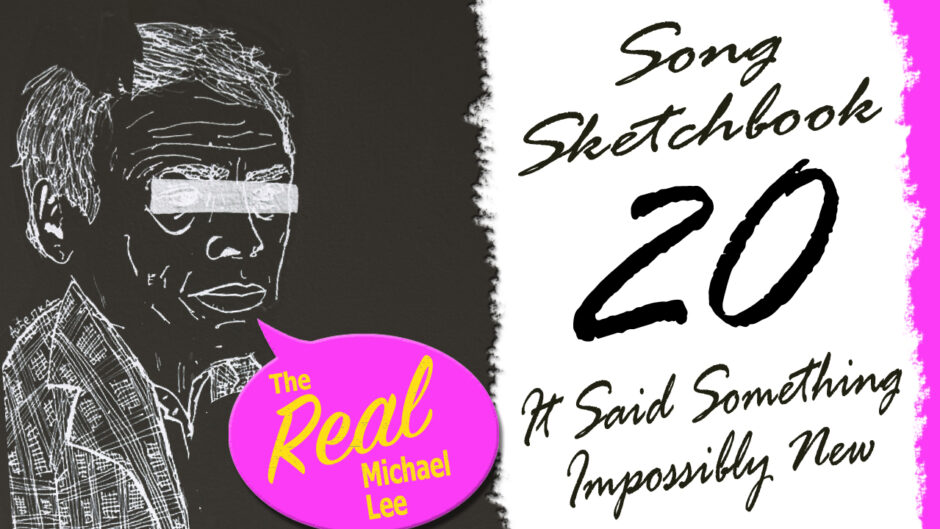 So this week’s song sketch is a big one. Not in trems of length, as it’s under three minutes long, but for another reason.

It’s the last one.

I’ve written and recorded 20 songs in 20 weeks. That’s a LOT of songs. The idea for this project was to create enough songs for an album. I feel I’ve done that and it’s time to move on. Right now I’m feeling an odd mixture of sadness, relief, and excitement. Sadness that this constant that was in my life is over. Relief that I now will have something resembling free time and less pressure. And excitement at the prospects to come.

When I set out on this project I only planned on doing 14-16 songs. Am I nuts? (Yes, but aren’t we all nowadays?) Why did I keep going? Well, for starters I didn’t feel I had enough solid content for the album. Second, I was starting to gain some traction with views and followers. Finally, I was also hitting a stride and finding a “sound” to call my own. It started in Where Are All The Jetpacks and continued from there. I veered here and there, but that distorted/synthy/folky sound carried through. I was (and very much am) digging it and wanted to see what else I could do.

It’s very interesting to see where I started and where I ended up with this project. I grew a LOT in my abilities in these last 20 weeks. Look at Tattoo versus this week’s It Said Something Impossibly New. The music and songwriting are quite different. Having to work on a very strict schedule forces you to adapt and grow. If you don’t you wither and perish. I honestly feel I truly flourished. I am far more confident in my abilities now than I was back in May. Are all the sketches zingers? No, not by any means. Some are questionable at best and most have issues in one form or another. But they all made it out of my head and into the world. That’s HUGE. Would I do it again and make a season 2? Possibly. The circumstances were ripe for this project, so it’s hard to say if it’ll be feasible again.

So what now? Well, the main push will be going back to sketch #1 and re-listen and analyze all the previous sketches. Doing this will determine A) which will make the cut for the album, and B) what changes need to be made. Then I’ll take those sketches and re-record them as needed into final versions for the album. I plan to officially release singles along the way with the full album at the end. Beyond that I plan to up my Youtube game and release more videos of me either performing or talking at the camera. I really like the idea of seeing beyond the mic and I think it’ll be a fun way to engage with you all. (I upgraded my setup, so these new videos should be slightly better than the previous ones.) I also created an official Instagram account, so I’ll post stuff there too.

But for the right now, I’m going to take a victory lap and enjoy my accomplishment. While I’m off doing that, check out the season finale of season one of my Song Sketchbook series and enjoy.