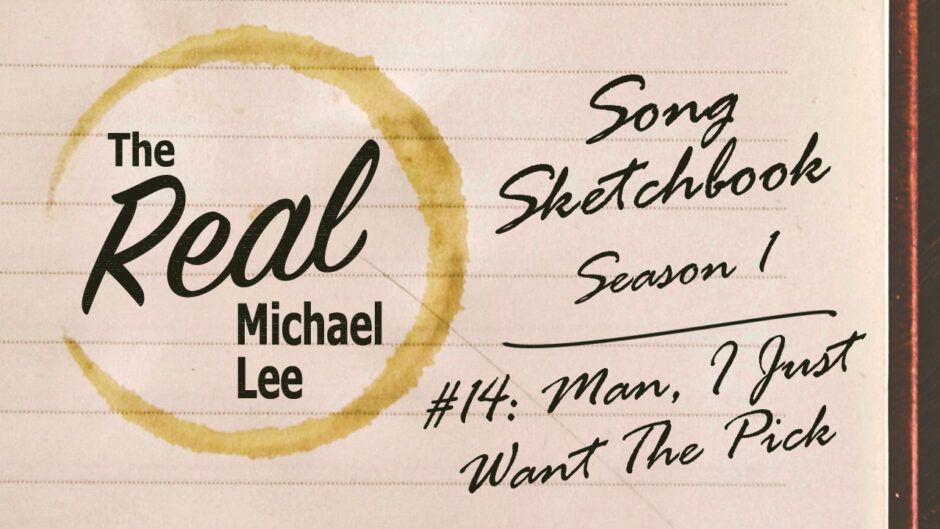 This week’s sketch was inspired by something a drunk person yelled (quite loudly) to the mandolin player at a Yonder Mountain String Band concert a few years ago. He then proceeded to attempt to jump the stage blockade and steal a setlist. Security ensured he did not succeed at acquiring either the pick or the setlist.

But, that phrase “man, I just want the pick” stuck with me. That dude was SERIOUS about getting that pick (he told me so in a very slurred manner), and it made me think about someone with such devotion to a band that they’re inspired to greatness (or imagine they are). They just need that one taste of magic to kick things off. Kinda like Journey’s “Jukebox Hero” meets Tenacious D’s Pick of Destiny.

Musically I feel this song lacks quite a bit. It suffers from me not being able to accomplish the sound I imagined due to not having the instruments needed to get that sound. (I find myself doing that a lot lately.) I’m also not a fan of the vocals. However I feel there is certainly something here that maybe just needs a different approach. I do quite enjoy some of the lyrics (especially that first verse). I might tweak some of the verbiage in the second verse, though, as it loses some flow in places. In all I think that, if this song makes the album, I’ll keep some elements, but overall it’ll sound very different than what we have here.