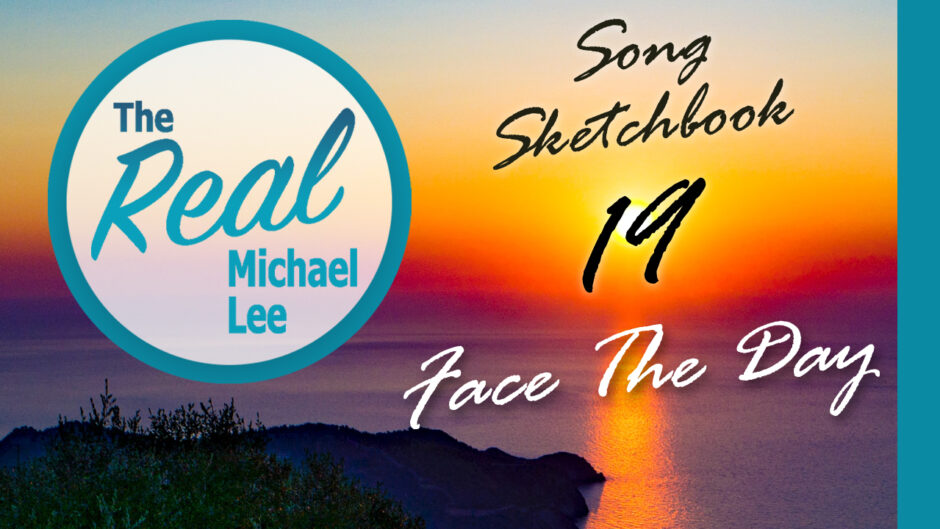 This song sketch is a cover of the song by the band fedbysound. It is also my third folk cover. That officially makes the practice of folk covers a “thing” for me.

See, the story goes a bunch of us on Twitter were discussing a virtual open mic and who was going to attend. Mark from fedbysound said he’d lurk but not perform. I jokingly threatened to do a folk cover of one of his songs if he didn’t perform. He still didn’t want to (which I understand). I don’t think anyone actually BELIEVED me when I said I’d do a folk cover (even though I’ve done it twice before). So I decided to go ahead and record one.

I picked Face The Day, which is the closing track from the album Resonate. I find it to be a beautiful and inspiring song and one that would work well in a folk setting. I didn’t want to do a straight acoustic cover of the song, as that would be boring (and frankly I can’t sing nearly as well as Mark can). So I stripped it down to a few chords and built it back up from there in a manner that fit my abilities as well as how I personally “felt” the song. The persistent “you can face the day” is an uplifting sentiment that the singer drives home to the listener. They’re saying “yeah, life sucks, but I GET it; I’ve BEEN THERE, just hang in there and keep BEING YOU”. I wanted to try to capture that sentiment aurally by having it sort of swell into the chorus. Then at the end the singer repeats it over and over like a mantra, reminding the listener they GOT THIS.

My ultimate goal was to honor the original but at the same time add my own flavor (like most covers, duh, Michael Lee). I feel I accomplished that. Admittedly this cover is probably the most I’ve ever put myself out there, as I’m not in contact with the artists of my previous cover songs. However Mark will hear the song and will likely read this. So I hope you like it, Mark. Or at least I hope you don’t hate it.