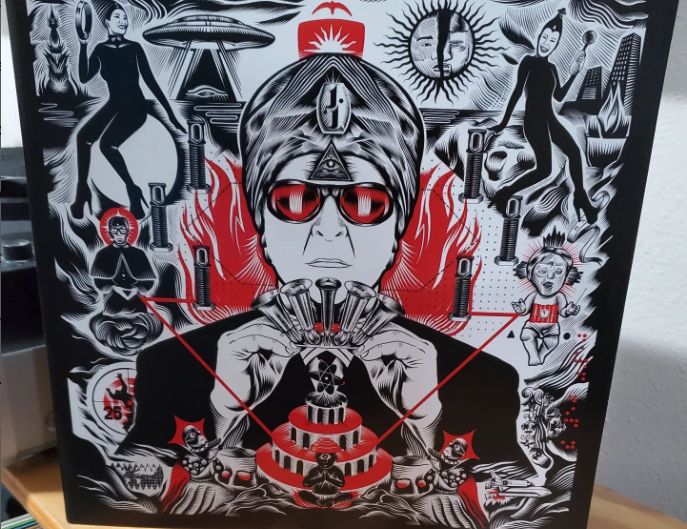 “Believe what you will… But do not make others eat from your plate…” With those words and tongue firmly planted in cheek, Gerald Casale embarks on a “war on stupidity” via his character Jihad Jerry. Being a founding member of Devo, Gerald builds on his years spent in that band and gives us an album that questions modern times via witty observation and parody. You have songs like “Army Girls Gone Wild” that parodies “red-blooded American” ideals via the infamous soft-core video series. Then you have songs like “Find Out” which do away with parody and take a more direct approach to call out those who will tell you what to think about subjects they really have no business speaking on. All this is done through a sonic landscape not unfamiliar to fans of Devo, albeit much more guitar-driven with a fuller sound that includes backup singers and various horns among the army of instruments Devo-tees are used to.

I’ve been a fan of Devo for quite some time. I saw them live back in ’04 and it was a sight to behold (yes, it included costume changes). Their sound is unique and highly influential. Gerald had a big hand in crafting that sound and his solo effort was a no-brainer to pick up. I hadn’t even heard it prior to grabbing it on Record Store day a few years ago, but I knew it was going to be interesting. I was not disappointed. It’s out there, as one would expect from a founding member of Devo, but it’s also thought-provoking and the issues it critiques are unfortunately still prevalent 16 years later. Maybe it’s time for Jerry to return to his war on stupidity? I don’t know if that’s in the cards, but I do know that this album is a fun and engaging listen and I’m glad it was rereleased, albeit briefly, to be discovered by a new generation of fans.