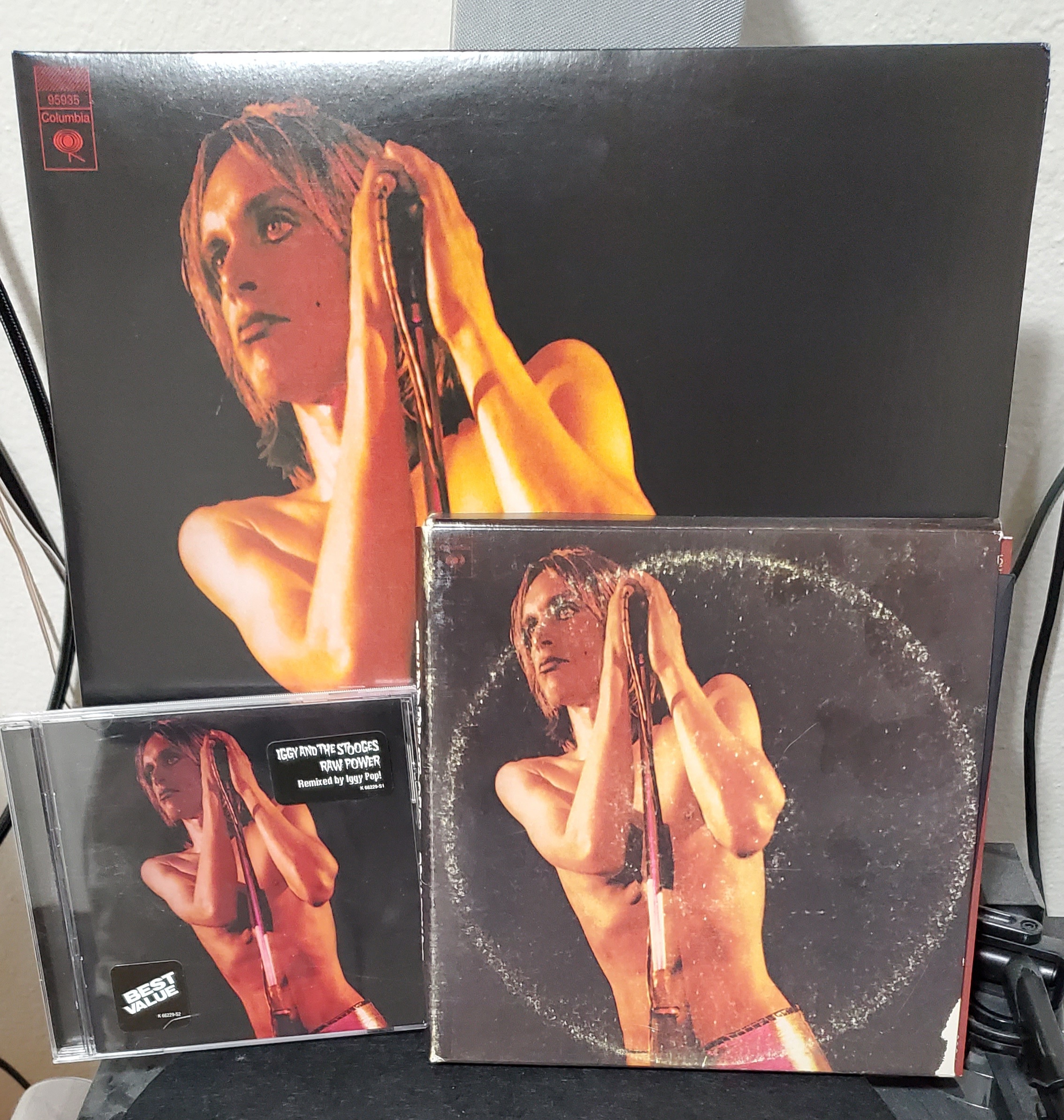 Iggy and the Stooges: Raw Power

This album… This f*%#$ing album… If you haven’t heard it, what are you doing with your life? Go, now, and listen to it. I’ll wait…
Done? Ok. Good. We can begin.
Raw Power was what ended up being the final Stooges studio album. In this, their third album, they perfected the sound and FEELING of their music, which was picked up upon and, only a few years later, would heavily influence the punk scene. It really is “raw” and brings the “power” from start to finish. That statement might seem trite, but you know I’m not wrong… And that opening line! “I’m a street walking cheetah with a heart full of napalm” has got to be the best opening line in an album practically ever. Grab the audience’s attention then take them on one hell of a ride! It was also produced by David Bowie, but his actual involvement varies depending on who you ask…
If it’s not clear by the above, I obviously REALLY like this album. I mean, I own THREE copies! My personal recommendation is to listen to the original mix on vinyl if possible. On CD or digital the distortion lacks warmth and a lot is lost in the translation. In ’97 Iggy tried to remix it for CD to replicate how it sounds on vinyl, but, while adequate, it just doesn’t work as well. Then in the early-10s they re-remixed it BACK to the vinyl mix for CD and it REALLY didn’t work. But now, thanks to the resurgence of vinyl popularity, you can enjoy it the way it works best. (Incidentally, the vinyl version I own includes both the original and ’97 mixes.) There’s also a bootleg of a mix billed as Iggy’s pre-Bowie mix. Admittedly I haven’t heard this version.
So there you have it. This is one of my favorite albums of all time and I feel if I’d be doing it a disservice if I didn’t mention it early on in this new Friday music-blurb-thingy I’m doing. Thanks for reading and keep those ears open!

For the inaugural post, I wanted to Highlight a really fun album from 2003. Whirlwind Heat’s Do Rabbits Wonder? is a an album that straddles the precipice of the absurd while strapped to a rocket. The sound is verging on anarchy while still maintaining something resembling order. Its overall sound is very garage rock (they were part of that scene in Detroit and this album was produced by Jack White), but has a sprinkling of experimental throughout. Oh, and their song titles are colors. So you gotta read the liner notes to learn anything about the songs.

I first heard of this trio when they opened for Beck on his Guero tour. I was hooked that night. Their stage presence was phenomenal. After the show I went to the merch booth and, knowing nothing of their discography, bought their followup EP, Flamingo Honey, which is only 10 minutes long. I later tracked down Do Rabbits Wonder? as I knew there had to be more than just the EP. Since then I’ve enjoyed this album over and over, each time finding something new to like about it.

It’s definitely worth a spin, especially if you’re into that raw garage rock sound.