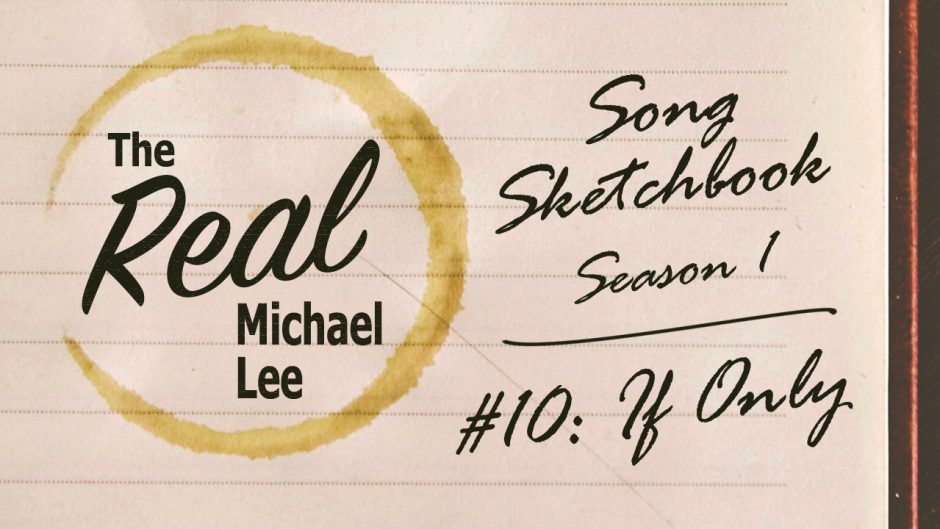 If only… This were a better song. So far in this project I have steered away from disparaging any of these songs. The idea is they are not complete and will grow with time. But, with If Only, I feel it is so rough and failed so much that it warrants an analysis into WHY it is not a good song.

Buckle up, cuz here we go.

After hitting what I felt to be a stride with a string of songs that had personality and were quite enjoyable (and yes, I’m including the weapon-grade earworm that is Drip), I decided to try something different. I thought to myself “let’s write an acoustic rock number”. This was the first big mistake, because the previous weeks were largely organic creations that were allowed to grow and mutate. Doing a complete 180 and severely limiting how the song should sound knocked me off the creative path that I was treading.

The second mistake was that I decided on the acoustic rock pigeon hole without having any idea what the song would be about. I landed on the “loser thinks person they’re lusting after can fix them” motif mid-day Sunday after I came up with a few lines while walking my dog. While this is by no means an abnormal occurrence, I now had the task of quickly cramming this idea into the sound I wanted to make. Side note: the vape/frisbee golf store referenced in the song DID actually exist. While that might be surprising, the implication in the use of past tense should surprise no-one.

This is where the wheels started to come off. While writing the song I simply could NOT get a rhythm to work with the lyrics. Instead of saying “screw the acoustic idea, let’s do this differently,” I pushed on and forced it into the acoustic style. Doing this was akin to cramming two puzzle pieces together that don’t fit. Because now that two of the pieces didn’t fit, the rest of the “puzzle” couldn’t work.

I didn’t land on a rhythm until I recorded it. Even then I ended up re-recording it with a slightly different rhythm. At this point I was already behind on my recording schedule and the warning lights were flashing. But instead of heeding the blatant warning signs, I covered up the check engine light with tape and pushed on.

At this point I’ve laid down the drums and guitar. Now for the vocals. Problem is, I’d changed up the rhythm, so the lyrics I wrote didn’t entirely work anymore. At this point it’s Wednesday and too late to rewrite, so I crammed them in. I pushed and smushed and jammed them into the framework of the music. The chorus fit fairly well as that was largely unchanged. But the verses… Yikes. I did something like 10 takes on the vocals and what you hear in the song is the best one. The vocals by and large are terrible. I think this is because, subconsciously, I knew the song wasn’t working and I just wasn’t putting in the usual care. I know I’m not the strongest singer out there, but this is bad even for me.

Now it’s just laying down the bass, adding a last-minutes shaker to add some personality (which didn’t help) and mixing it down.

That’s all that went wrong. Was there anything that I feel went “right?” Yes, admittedly I don’t dislike EVERYTHING about this song. The chorus isn’t too bad as it has a nice hook with the “why oh why” bit. I also am somewhat partial to the main riff, despite it being obviously influenced by the Red Hot Chili Peppers. I also like some of the lyrics. Lines like “minimum wage ambassador” and the day drinking bit are decent, just executed poorly.

In the end, what did I learn from this experience? First off, I learned the creative process (for me) needs to be organic. While fitting a subject into a style isn’t usually difficult, I need to write with that in mind so the process is more organic. I also learned to watch for the warning signs. If the song just isn’t working, either change gears on the song or shelve it for a bit and record something else, like a cover (which would have sounded way better than this). Don’t try to cram disparaging ideas together and hope they work. You wouldn’t tape a cell phone to a duck, would you? (Would you?!)